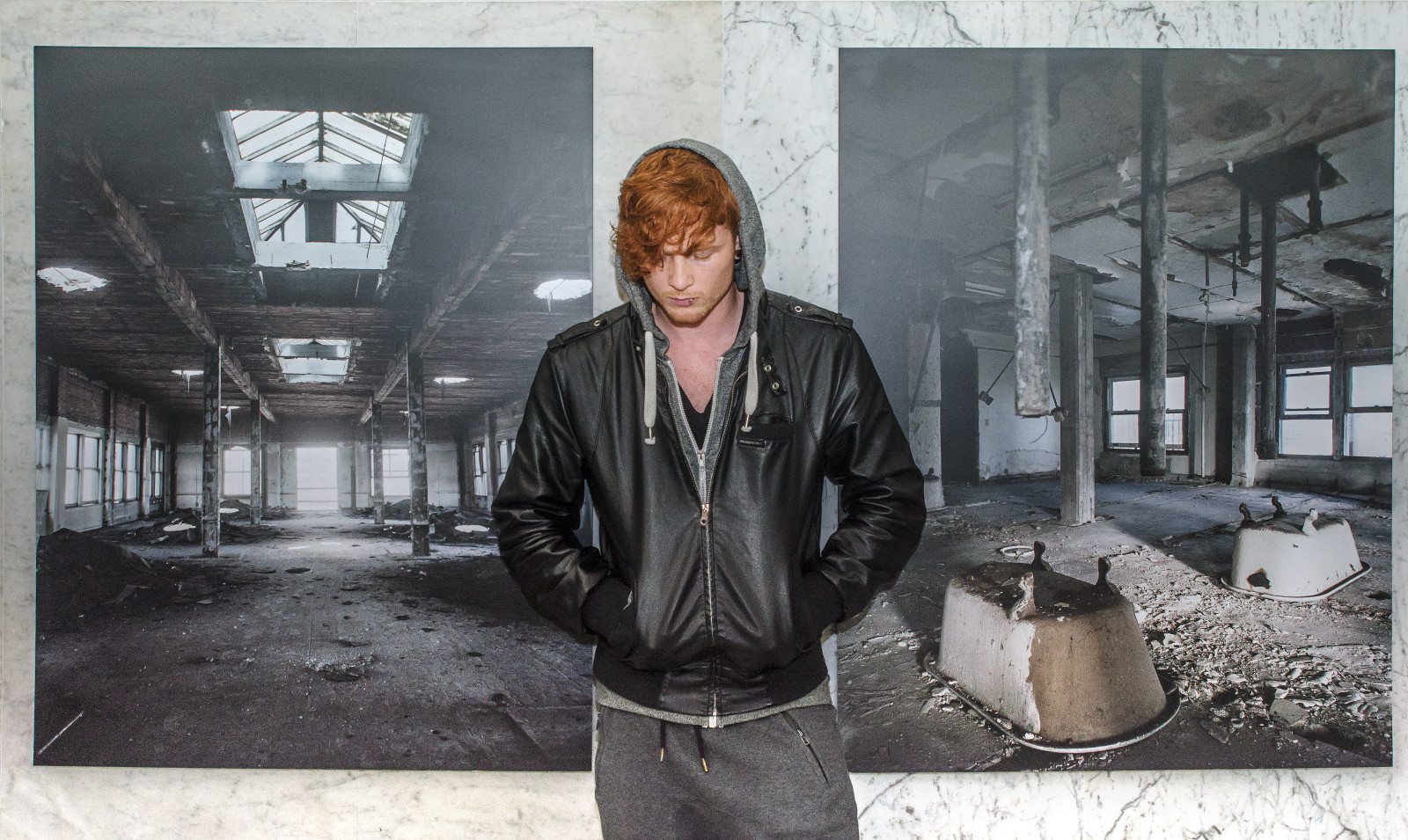 “Why do you still get nervous about this?” Justin Phillips, or Crywolf, thought to himself. “It’s the same show 100 times over the course of last year, you have nothing to worry about.”

From backstage he could see the crowd looking forward in anticipation for his set. He shifted his weight from one foot to the other as the lights swirled magenta and red on the stage floor while he took a deep breath to calm his pre-performance jitters.

“If I wasn’t nervous at all, that would mean that I was doing stuff that was so easy that I don’t need to be nervous,” Justin said. “If I’m onstage and I perform something really easy, I can’t really engage people because I feel like it’s fake.”

He walked over to his mix-tables with his game face and played the first track of the night, “The Home We Made Pt. II.” From the first bass drop and on, he bounced with the beat and a girl’s voice cut through the track as he threw his arms up toward the crowd and mouthed the lyrics.

The line was put on repeat as the beat built up with a quick tempo, and Justin clapped his hands in the air and the audience joined in. The beat slowed down and the girl’s voice came back.

“But they shot us down.”

As if on cue, the crowd collided in tune with the boom of the bass on stage.

Crywolf was named after a reoccurring dream Justin had from his mid to late teens. All of his loved ones would be in the same room and a prominent image of a tribal wolf head with tears coming out of its eyes would appear. Justin described having these dreams during the most difficult periods of his life.

“I would get into these depressive periods where I couldn’t even move physically because I was just so cripplingly depressed [that] I never really knew that was what it was,” Justin said.

From the time he was 13 till he was 20 years old, Justin simply thought that the intense emotions he felt were part of being a teenager. His hometown, Raleigh, North Carolina, was a conservative community where the concept of depression “was very looked down on to being treated as a brain chemical disorder” and any symptoms resembling it were socially diagnosed as “kids just being kids.”

“At one point the depression was more involved in hopelessness and not as much in sadness,” Justin explained. “I think the natural thing that people think of depression is, ‘Oh, that’s sadness,’ but I don’t think that sadness is really it. It’s the thought that you’ll never be anything else but sad. The thought that it’s never going to change…Those are the things that are the cyclical snowball effect of emotions and then suddenly you’re just having these huge swings of where you’re up and down.”

He spoke to us with a boyish smile and his eyes lit up the most when he would talk about his music. Donning a black v-neck t-shirt underneath a dark grey, cotton hoodie and sporting black earplugs and a lip ring, he could easily blend in among the fans at his shows. He even laughed when he reflected on how his personality differed from now compared to before.

“I used to start fights all the time and deal with so much overwhelming anger,” Justin said. “It’s insane to me [now] about feeling that way.”

Unknowingly, the path out of depression began from a “fuck it” moment.

He dropped everything in his life at the age of 17, bought a motorcycle and began a journey across the States. He ended up in Reno, Nevada where he spent a month with street artists and met two of his best friends. When he returned to North Carolina, he decided to bring what he was exposed to on the West Coast to the streets of his conservative community.

“I’ve never done visual arts,” Justin said. “Switching over to a completely different medium kind of just unlocked something inside of me…I would make these pieces because these juxtapositions of things just pop in my head, and I would create them.”

Once Justin was able to freely express his art without any self-criticism or concern of public opinion, he was able to transfer that same mentality into his music where he was struggling to find his own voice in the creation process.

“I just didn’t really know how to make it genuine,” Justin said.

Prior to street art, Justin was surrounded by music within his family. Growing up, his mom and dad would play music and Justin played the guitar and piano. Justin recognized that there was a certain effect other writers and musicians had on their fans and he wanted to be able to draw on that same ability. He attempted to replicate their musical methods and apply them towards his words and music.

But he was always dissatisfied with the results:   “[It was] a natural thing for me to do growing up, expressing myself through music, even though most of my early expressions in music were just embarrassingly terrible,” Justin said. “I just made music my whole life and I’ve always had a desire to be more serious about it, but there just really wasn’t ever a clear opportunity.”

Once Justin was able to make what he called his “real expressions” through street art, he revisited his music endeavors from the perspective of making music just for himself and exploring his personal situations while carrying over the creative process he learned through art.

“As soon as I started making it, there was this huge weight that was taken off my chest,” Justin said. “It was like there was this ocean of tumultuous…emotions inside of me and it just got released into this art, and then I was fine. I didn’t have that inside of me anymore. I was at peace…It’s really crazy to think about who I was emotionally and as a person before I was making that art and afterward.”

Though Justin created Crywolf’s music through his vulnerable experiences, his fans definitely took notice. He would receive daily messages on how his music helped them through suicide, depression and other areas of their life that he didn’t expect would reach out to them so personally. Justin said that his music frequents the idea of hopelessness, and at first he didn’t understand why listening to this type of music would alleviate another person’s pain – he thought it would do the opposite.

“People deal with having these feelings and not having really any understanding of them or any way of expressing them,” Justin said. “When you put words to something that somebody is already feeling, it’s sort of putting it out more in the open. It makes it more something that you can observe and dissect and understand as opposed to this mysterious negative emotion that you’re feeling.”

“The most important rules that I learned with being able to cope with depression is to not see sadness as something negative because when you see it as negative, you fight against it,” Justin said. “When you see it as uniquely beautiful…so positive and so poetic, then the sad parts of life are just as important as the happy things.”

Not only has he been able to reach out to his fans, who related to his lyrics and music, but last October, he was able to help his younger brother, Trevor, who suffered from brain AVM – arteriovenous malformation. AVM is when abnormal arteries and veins are tangled, and in Trevor’s case, in the brain. During practice with his acapella group, one of the veins burst and Trevor collapsed. The danger occurs when the blood comes into contact with the brain matter, which causes brain damage. After three surgeries, almost all but five percent of the AVM was removed, but Trevor was faced with substantial medical bills.

“As soon as I heard about it I was like, ‘I gotta do something,’” Justin said.   For one week last October, all the proceeds from Crywolf’s three EPs, “Ghosts,” “Angels” and “Runaway” went towards Trevor’s medical expenses. Justin was able to match every dollar of the sale and the amount covered all of Trevor’s bills.

The more Justin allowed his words, music, and voice to flow freely and produced content that he liked, as opposed to what he anticipated the EDM community would like, each Crywolf EP became more successful than the last. His first album, “Ghosts,” landed him the #1 spot on Dubstep.net on the first day it was released.

“The most important rules that I learned with being able to cope with depression is to not see sadness as something negative because when you see it as negative, you fight against it,” Justin said. “When you see it as uniquely beautiful…so positive and so poetic, then the sad parts of life are just as important as the happy things.”

cry wolfDjmulti-instrumentalistproducervocalist
You May Also Like
dauntless (a note of gratitude for the ephemerality of life)mj@thelovestory.orgJanuary 7, 2022April 26, 2022