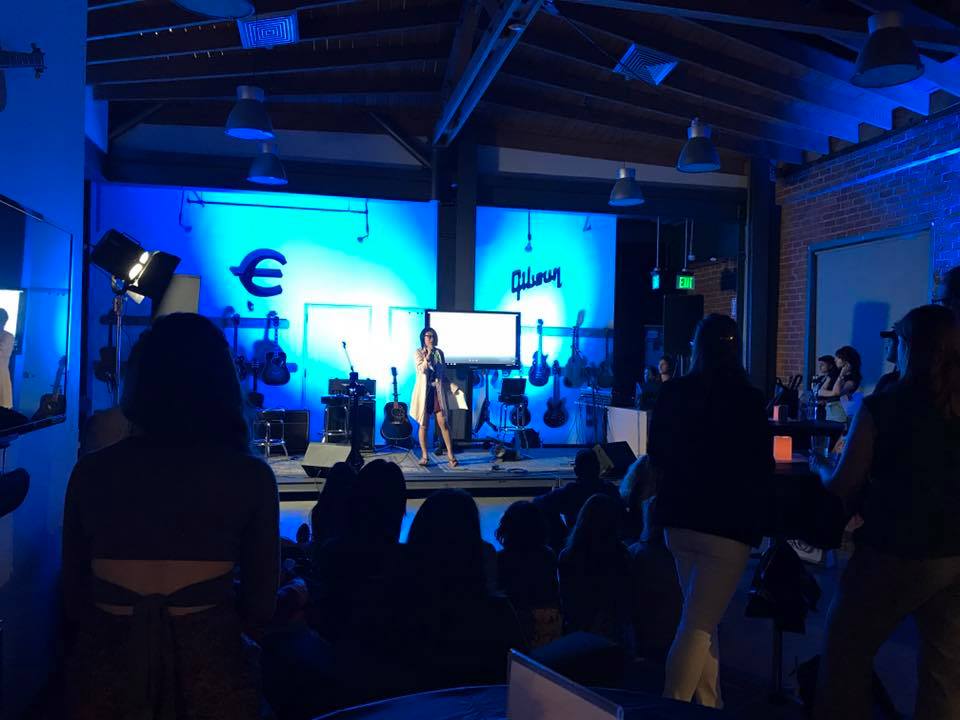 “Recognizing that I can’t just sit back and be alone, that I need to do things that foster connection. Again, that came down to what do I believe that is, and that was food.”

Based on a True Love Story Showcase.

Destiny Muse. Beautiful women. From Megan to Skyler to Madilyn, all beautiful women with our own stories, passing along the baton while they go out in the world and make sense of it all.

So here we are. Broken. Broken Open.

Bryan-Inspired: He gave you the audacity to speak from the heart, on your feet, grounded, and pulled apart.

And now, he’s come back to experience the manifestation of what he shared before at Cross Campus.

Sri came to see how the Love Story Manifested. The friend you want to break his heart open from the tech mind, the competition, the hustle, and now the heartfelt laughter resonated with him while Indy Rishi got us all to laugh.

This time, you’re more coordinated. You realize that you rely on others, those who build connections, while you come up with the next two steppin’. This doesn’t even have to make sense or be fixed, edited, why? Cause it’s a fucking diary. Free flowing. Get out of your head and into your heart.

People speaking their truth on topics that may not be popular. Long live free speech. Long live libertarians (whatever that means nowadays), but in this confluent haze, there is palpable love in this room.

This time, Gibson Guitar, Trader Joes, Pei Wei, and Health-Ade Kombucha all came together to support the conscious artistic movement. And you, baby girl, you are learning. After 20+ cold pitch sponsorship letters, a deck that nobody bit, it’s all inching forward on this journey. You think about Judah Smith, who started in Jason Kennedy’s house, and you realize that this is the “Jason Kennedy’s house” in the version of the “Gibson House.”

Mac, Rily stayed the night to listen to the talks, bringing the transformation festivals into the studio, trickling into the mainstream industry. Live Nation next door, the Confluence invited you to Paley where you met a few movers and shakers, looking out for the little fish, in this sea of big fishes.

You were able to finally express–what took three years of interviewing heArtists to pull apart.

None of the men you wanted to come, came, just like Megan Dooley’s love didn’t come that day she was there to process her pain. You had told her that day that it wasn’t meant for him to see.

See, that is part of codependence–for we think we need our companion to see our process when that process is designed to be walked alone. Jesus didn’t ask his disciples to walk his 40 days across the desert, but he did have the devil and God by his side, left and right, the higher or lower path, and so this is the hero’s journey, and it must be walked solo, without the dependency of another person to validate our process, our worth, and so that ability to sit, you appreciate what your drum & bass ex-boyfriend had once told you;

“MJ, you must sit in your body,” he once told you. Balded headed guru.

You had once latched onto him, or rather leeched onto him, and sucked his essence dry with your critical tongue, cutting him down in half, and you felt powerful when he was weak, like some energetic vampire.

You realize why you did that–you were feeling insignificant, so you needed someone to feel weak so you can find a way to fix and feel relevant. And the way you had been selling it as “transformation” was misinformation and manipulation.

You knew that was bullshit, but you were just being what you knew to be love–your mother’s curse when she grew up with her mother’s controlling tongue. You see your soul sister in San Francisco enacting the same scenario–what is it about women? It isn’t just Asian women you noticed–it’s that element of the controlling and fixing mother.

But before you start pointing the finger once again at the one person who would stand in front of a bus so she, instead of you, would die, it’s best to break the spell of this multi-generational curse and come to forgive everyone traveling up and through the lineage–the bloodlines.

Forgiveness is the key to fully living this life with a brand new perspective. You, along with a slew of love story creatives, have been coming together–the adventure journalists, the associate producers, the film crew and sure it was a bit discombobulated, but people saw you and offered help to make this evening possible.

Once again, from Jo Pessin and many other attendees who came, told you they want this every month, including Mac who keeps inviting you back. You smile and then the anxiety overwhelms–you get into your head–how am I to afford this? How am I to promote this? Or at least break even–All the figuring out, but you are running around gracious, a servant, and thankful that all the people who build their energy to make this dream possible.

There was something major and missing. You look up at the half moon as you were driving home to your mother and father’s home. You forgot to thank them in public, inside the Gibson room, and you called out their sins rather than their HeArt. Your father, a brilliant man who supported you from the start, even to this very day–his love language is to do for you. Your mother, an unconditional and forgiving mother, who supported you through doing for you. Two monkeys raising a piglet, constantly doing for you (a Chinese zodiac reference).

“How long does it take for a person to get over someone you deeply love?”

“the exact same amount of time you were with that person.”

And it hits you after the showcase. You are officially over your ex-husband.

You and your best friend had been together for 7 years and it’s now been officially 7 years that you two have been apart.

You remember during the first year post-divorce, you had written that seething letter to his new wife. The woman who had the affair with your husband the last half year you were together. During the fallout, he had told you that he’s so happy with her now, and you had pointed out that you’d be surprised if they lasted more than the years you and he had been together. And secretly, you had wished that they would be miserable and break up.

But today, 7 years later, you wish both of them love and good health, to raise their daughter in a nuclear family, a warm environment and the kind of loving life that you had glimpses of in your childhood. When their love was at its peak, you were able to witness it at five. In those moments, you saw their love for each other, the passion, and you knew you were born out of love.