“Love Is Impatient, Love is Cruel” Fiction. Based on a True Feline. 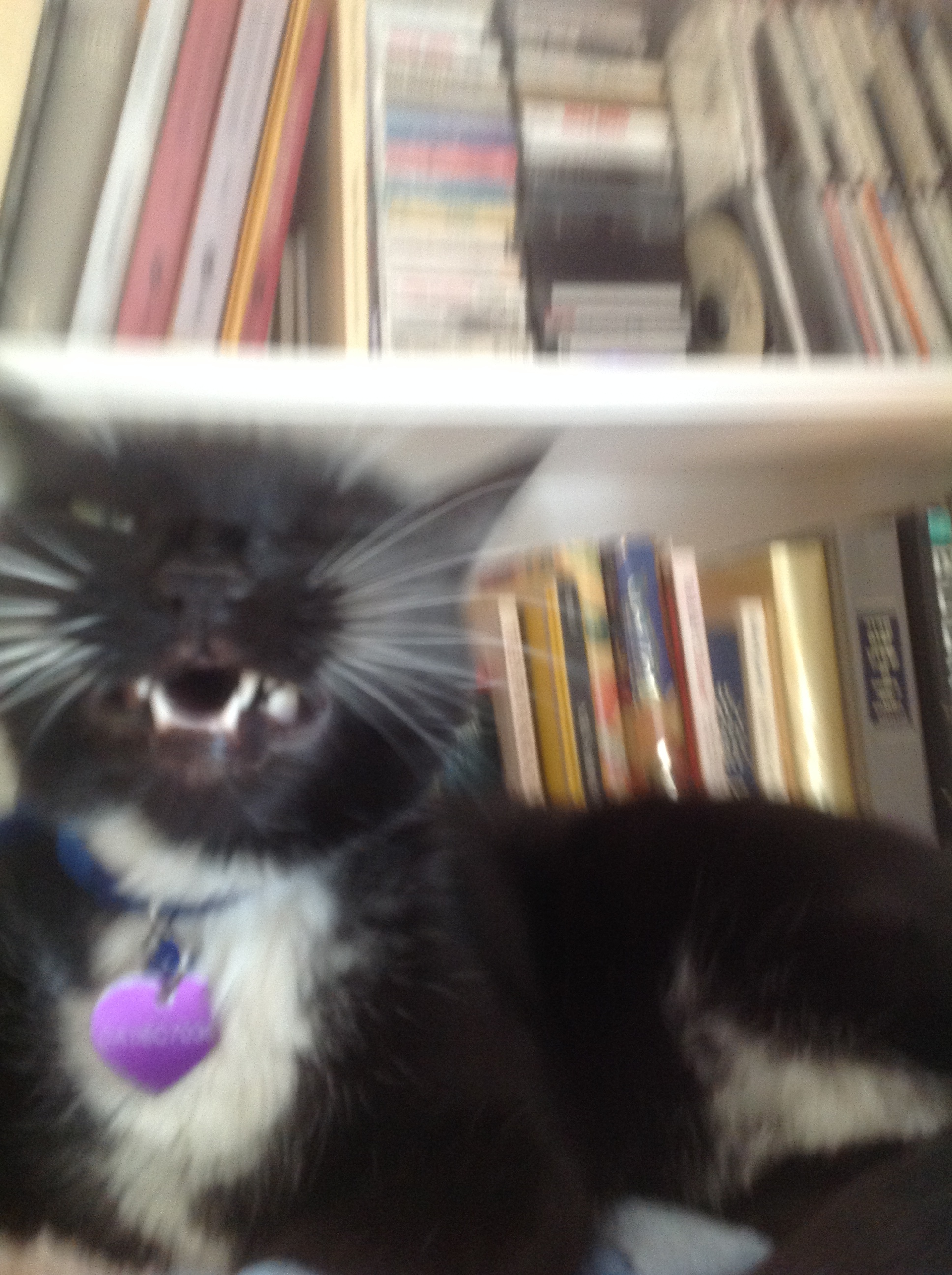 “Those thoughts, if you don’t find a place for them, they will come back to haunt you. So you gotta deliver them somewhere.” – Che Rest

“Love Is Impatient, Love is Cruel”

Fiction. Based on a True Feline.

I originally named my cat Venus after the goddess of love and beauty.  Now I realize that a more suitable name may be Artemis. Although she is affectionate towards humans, she is a ferocious huntress, and is fairly ignorant to the love that the goddess Venus represents.  Once, she found herself in a rather disastrous situation in which she caught and snapped the neck of a mated Blue Jay.  The Jay’s mate gathered other members of its flock. Together, they all cornered her under the picnic table, squawking, screeching, clawing at the glass, and flapping hysterically.  As Venus merely sat on her haunches under the table, calmly decapitating her kill, pangs of both disgust and envy lurched through me; disgust that she felt no remorse for her actions from witnessing the suffering of other beings, and envy that she wasn’t suffering—that she didn’t have to suffer.  After about two hours, the Jay’s mate and its flock flew off, their demented cawing fading into the trees.  Venus continued to eat.

Blue Jays are not the only species that mate for life.  A few other birds, dolphins, occasionally large felines, and wolves will remain with their one chosen mate until death.  Wolves will frequently starve themselves or simply die from loneliness within a month of their mate’s passing.

Mating rituals of humans however, tend to differ from those of other organisms.  Humans sense the pheromones of a potential mate, approach with caution and frantically search their grapefruit-sized brains for an indirect gateway to sex.  For instance, Wanna grab coffee? Or perhaps, I have extra tickets for—and finally So, uh…can I have your number?  After which, they may internally plea, desperately, not to be rejected.  If the potential mate directly states or merely implies no, they may slink away tails between their legs, dejectedly whimpering.  If the potential mate says Sure, or even I’d love to, and their blood fills with adrenaline and perhaps their genitalia will exhibit a physical response of excitement (as is common with most species).  They woo and fawn and perhaps even pray to every god imaginable until, at long last, they are able to perform the act of mating. Human biology will sing with joy at the potential to bring forth offspring and continue their species’ population.

Yet for some of humans, there is a sensation beyond this immediate physical gratification; an emotion of sorts that drives them to desire mating with only a single other human—and possibly to even long for something more than reproduction.

The words assigned to this emotion that consume humans and possibly a few other species as intensely as the need for reproduction are referred to as “romance”, “love,” or “romantic love.”  However this “love” is not necessarily required for human survival, nor technically is it required for the survival of any species. Why then, does it exist?

One would assume that ‘love’ hinders more than it helps, as it tends to often result in intense emotional agony.  It was March of 2012 when my own ‘heart’ was ‘broken’. A close friend of mine had broken up with his girlfriend, and the man I ‘loved’ swooped in to provide her with the comfort of rebound sex.  This was a man I’d confessed my deepest, darkest 17-year-old secrets to, who’d held me as I cried, who’d noticed my suffering when no one else did, who’d thought I was beautiful, intelligent, witty, and once claimed to love me in return.  Yet he disregarded all of that, and three days later, they declared their new relationship on Facebook. I’d had no knowledge of the situation until I saw the status. Very high school. Much teenage angst. Wow. And of course, the inevitable ‘heartbreak’ that resulted from this short burst of ‘first love’ provided absolutely no assistance in the survival of the human species, nor did it benefit me in any other than brief bouts of enjoyment.

Every day and night, abuse hotlines are bombarded with phone calls.  Psychologists have many theories as to why people don’t leave their abusers.  My theory is that they reminisce on the wonderfully ‘romantic’ moments, the ones that produced the initial exhilaration of love, and cling to those moments as a life vest to prevent themselves from drowning in oceans of suffering.  I certainly felt that way as I clung to the positive memories after my first heartbreak, and once when I myself decided to stay with a man who found it acceptable to call me worthless and encourage dangerous weight loss.

The ultimate example of abuse though, occurs in the animal kingdom.  Female spiders and mantises will eat their mates after sex. A friend of mine once explored this oddity through music writing:

This is highly disturbing.

I understand the scientific notion.  The nutrients from the eaten male will provide sustenance for the offspring, and will assist in the mother’s birthing process.  I suppose truly, in the animal kingdom, it cannot truly be considered abuse; it is survival. It’s impossible to know what the spiders or mantises are thinking during the act, but I can certainly make one conclusion—it isn’t love.

With my personal experience as proof, love common in humans, but it’s certainly not required.  Many people tend to talk poorly of romance novels or even romance in general, claiming that it’s “gay” or laughable.  Then there are those people who’ve been ‘in love,’ had their hearts shattered, never want to repeat that experience, and will just stick to adopting thirty cats and eating ice cream out of the tub, thank you very much.  And of course, there’s the hopeless romantics who swoon and pray for a man or woman to sweep them off their feet, buy them chocolates and flowers, hold them all the way through The Notebook, and have frequent PDA’s that make everyone else either uncomfortable or jealous.  I am all of these people, rolled into one heap of confusion; with a tendency towards one-night stands followed by massive regret, internally screaming WHY WILL NO ONE LOVE ME, Supernatural reruns, and an open admission to loving cats more than is considered acceptable.

Wolves seem to view love much more simply than humans.  For them, it is the most ideal way to mate and ensure the survival of their species.  Some humans have discovered this to some extent—those who have been together for multiple decades.  Others obviously, have not. One can only conclude perhaps, that love only exists when it’s absolutely necessary.  Otherwise, the conscious mind must fulfill that need in ways that differ not only species to species, but organism to organism.

CatsLifeLovemates
You May Also Like
No Holding On, No Holding BackThe Love Story CreativesSeptember 10, 2021September 4, 2021

But we cannot force them into the present. Instead, they also mingle with the waters...