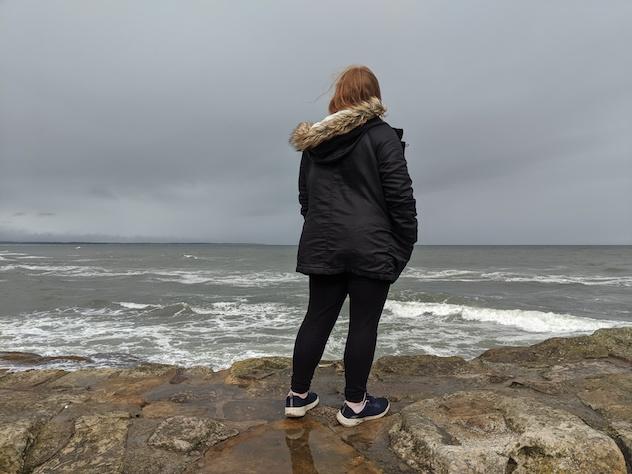 “There’s FM, there’s AM, and then there’s the channels that are off-shore. What do you want to be? And you have that choice…” -Dean Fidelman

Fiction. Based on a True Journey into the Unknown

She stands on top of a seawall, looking down at the gray, raging waters below. Her stomach is tight, wringing itself into knots. The wind pulling at her hair could push her forward and knock her over the edge.

She would normally stand on top of things, let along on top of something overlooking a long drop below. Or stand close to a precarious edge.

Scenarios of falling play through her head and the cold fear never leaves her throat. It feels like she’ll go over the edge at any moment. Even though nothing is going to grab her, and the seawall will hold, she still feels the sensation of falling with each breath. An invisible fear that refuses to go down.

Still, she holds her ground. One breath. Two breaths.

The ocean is before her, crashing against the rocky shore. It churns and writhes, blue and gray mixing with white froth. Unending, unchanging.

She finds herself doing things she used to never do before. Climbing heights she never would, going where she’s never gone, testing limits she never did before. The hesitation and fear still remain, but still, she goes forward. Each step reveals a new part of herself, the good, the bad, and the undiscovered. Like the ocean against rocks, the unknown wears away the rough edges of herself to reveal the truth underneath. The wanderers of old had some wisdom when they went out into the world and found parts of themselves in the vastness of the unexplored.
She too is finding out the same thing, learning to listen to the whispers of the wind, the lessons of the mountains, the story of the valleys, and the quiet thunder of nature.

She steps off the wall and returns to solid ground. There are more unknowns to see.