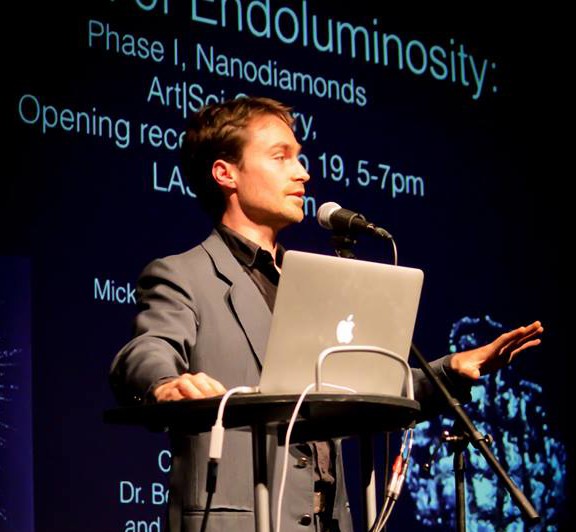 For artist and exhibition coordinator Mick Lorusso, light is everything. It’s his favorite medium and accent, and he insists that it’s also an underrated constant in the life of every person, with healing properties that we are only beginning to understand. It all started when Mick lost his beloved stepfather, Pancho, to leukemia when he was twenty-one. Mick’s biological father was already gone, having taken his own life about ten years before Pancho passed.

“It was like a nuclear reaction in my consciousness…”

Though Mick already had some firsthand experience with death when his stepfather became ill, he says that Pancho’s passing was sudden, unexpected, and most of all, devastating. “It was like a nuclear reaction in my consciousness,” he says. Pancho only survived two months after his initial diagnosis and the way that the disease ravaged his mind and body was difficult for his wife and stepson to watch. Still, thanks to a visit from Pancho in a dream, Mick was not only able to reconcile his grief, but also to harness it, and focus it on something productive, even healing.

“Thanks to those dreams,” says Mick, “I had a sense that he was okay—that something inexplicably beautiful had happened inside him despite the horror of the physical circumstances.”

Pancho was in his last days of life when a hemorrhage in his brain left him unable to speak and, thus, unable to express his thoughts and emotions to those near him. It was one night in that last and most difficult period that Mick had his vision.

In the dream, Pancho came to him and he spoke. He showed Mick the blood on his brain—the hemorrhage. A light emanated from inside the center of Pancho’s brain and grew until it enveloped his entire body, and then Mick’s stepfather prepared to board a bus.

“Thanks to those dreams,” says Mick, “I had a sense that he was okay—that something inexplicably beautiful had happened inside him despite the horror of the physical circumstances.”

Above: Molecular model of a nanodiamond Mick says that the theme of light has permeated his work ever since. His piece titled “Skull Light,” for instance—essentially, an x-ray image of a skull in profile with a yellow burst emanating outward from the center—is his attempt to visually convey the experience of that bizarre-yet-inspiring “meeting” with his stepfather; his sculpture, “Diamond Core,” (of which he describes the scale thus: “if you were to curl up in a ball, it would be that size”) is another representation of the light that comes from inside us all. This particular concept, though, came to Mick as another light-filled vision during a shamanic ceremony he experienced in Peru shortly after Pancho’s death.

If the light is the “yang” to Mick’s artistic dualism, then the “yin” is science. After impressing a college professor with a couple of his science fair experiments, Mick was offered a summer internship studying a particular type of yeast in a lab at the University of Utah. He accepted the position and was off and running toward a career under a microscope, but he quickly grew tired of lab life. The result was Mick burning out on the sciences before taking a single college credit. His passion for science, though—especially as it concerns the many iterations of light and its uses—has continued to push his art forward.

Above: Mick’s Model of the carbon lattice of a nanodiamond

Above: Mick lecturing at UCLA about his projects with bacteria that create electricity to illuminate theatrical spaces. Mick has somehow managed to find the perfect marriage of his two passions as the Exhibition Coordinator of the UCLA Art/Sci Center and Gallery, which regularly exhibits works of fine art that have their foundation in the sciences: think light displays that respond to brainwaves, or bacteria that can create enough electricity to power an LED light. On March 2015, the gallery hosted “Museum of Endoluminosity, Phase I: From Nanodiamonds to Healing,” which included a series of pieces created by Mick in collaboration with a number of UCLA scientists and artists, including the two pieces previously mentioned in this article.

Since he began studying the effects of light, Mick says that he’s found myriad ways in which light affects people and animals: DNA, for example, he says “emits very dim and coherent light all of the time”; many mystic traditions make reference to a source of “inner light” and light emissions called biophotons may be essential to intercellular communications, Mick says. “On both a physical and psychological level, light is something that brings us clarity, helping us understand where we are situated,” says Mick, “and it gives us energy. By extension, it can also help us grow, heal, and communicate”; all themes that reverberate in Mick’s life, as well as his art.

On March 2015, the gallery hosted “Museum of Endoluminosity, Phase I: From Nanodiamonds to Healing”, which included a series of pieces created by Mick in collaboration with a number of UCLA scientists and artists, including the two pieces previously mentioned in this article.

Special Thanks to: UCLA Art|Sci Center