“A Rhyme for Palestine” Based on a True Visit to a Palestinian Refugee Camp.

“A Rhyme for Palestine” Based on a True Visit to a Palestinian Refugee Camp.The Love Story CreativesJuly 15, 2019August 20, 2019 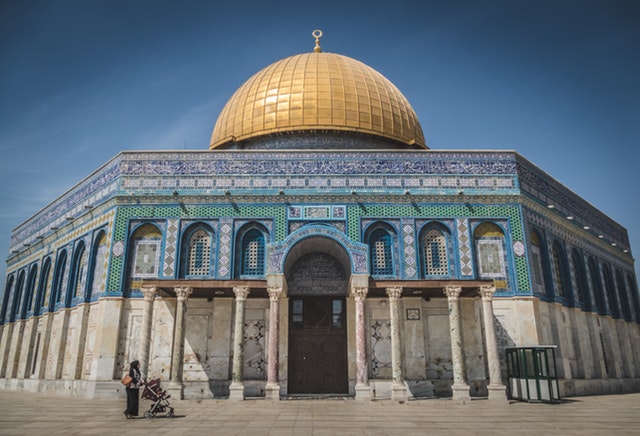 You’re a special class living in a house of glass while holding rocks in your hands.

The rocks you sleep on causes nerve pains, now on edge.

The foundation you’ve built your community on—the tablets, the commands, the law, are missing one thing—it is the one thing you can’t touch but once it touches you, you are able to touch others in the unseen realm.

Can you find the space to grieve so you begin the process of forgiveness? Hardening hearts have hardened walls, fortified in Kings in the rock that blinded the eye once but some miracles are only meant to be performed once.

Now the time of rock throwing—is over.

A new rock, set upon the Temple Mount, that opened the portal where Mohammad passed through, where Jesus gave the New Covenant, where the beginning of the middle kingdom was created when Adam and Eve left Paradise and began a timeline of a storyline revealed in three eyes of faith.

Abraham, the father of the promise God gave in faith, seeks to unite us all.

Hardened hearts have hardened walls and a narrative that cocks a gun rather than a handshake with a warm embrace.

Yet, I, the foreigner, the visitor, comes through and both sides look into my eyes and say, “Welcome.”

I am welcomed because I am not here to settle but to visit.

I am welcomed because I know that I am only a visitor on this planet.

My soul tells me that I do not belong here—nor do I want to be.

The land, the sea, the trees do not belong to me nor I it.

When I die, it is my heart who will convict my soul and the portal to heaven is now opened at any time-space continuum and is not relegated to the Temple Mount, though the Temple Mount serves as a transcendental metaphor of the human soul in relation to the foundation of the heart.

The Foundation is love, through love, for the sake of love. That is the only way because the gate to heaven is as narrow as the eye of a needle, and if we are to begin sewing, we must first sow the seeds of love.

If the means of achieving the thing is the same as the means that once made you a victim, then the act of achieving by this means will make the thing you have achieved empty and meaningless.

God designed your walk to be meaningful.

Home is where the heart is and if we don’t have hearts for people as people, then we have no home. We find ourselves once again wandering in the desert like our ancestors. If the people on the Temple Mount are fixated on tribes rather than the trials against the enemy and his legion unseen, then we have lost the point of the Temple Mount in its entirety like overlooking the forest through a fixation on a few trees.

Allah means God above all.

Jesus preaches the law of Love that fulfills all laws—Love Thy Neighbor.

Moses leads his people out of the bondage of slavery and into the land of the free.

You can’t have freedom, if you become the bondsman enslaving others.

You can’t know Jesus if you have no love in your own heart for your neighbors.

You can’t claim God if you do not respect God’s most precious divine law of them all—the Law of Sovereignty, of the individual soul and his free will to be or not to be.

These are the knots of each faith-bearer.

Focus on untangling your own knot before you set about untying others and fulfilling God’s promise for the world—anything short of Love is a facade rather than a foundation. Setting about building walls to hide, setting your gun to point at targets of other people in the name of, and using that same gun to force displacement are the tools of the enemy in the unseen realm.

These are all maya—the maya we must each break free from when we are set to face the trials before us so we can judge another person by the same measure that we are judged.

This is how the cracks in the wall begin to show.

The cracks is where the light shines in says Rumi—a mystic Sulfi poet.

Where there is Love, there is God.

Where there is Welcome, there is God.

Where there is Surrender, a desire to drop the rock, there is God.

Faith over fear, compassion over apathy, and love over laws.

You have been called by God to fulfill this commandment—the one commandment that is the only way that God’s promises to Abraham is fulfilled:

The cracks in the wall are where the light shines in.

Starting with the cracks on your cheeks when you smile.

Or cracking up over a joke.

Or cracks alongside the concrete walls through the cries that long for love again.

The real battle is Faith over fear.

You and I don’t belong here anyway.

We belong to God.

We are the chosen ones.

To Love or not to love.

Today, a group of teenagers, guys and girls, wearing a green jumpsuit and black hats, were holding AKs around their shoulders, walking across the street of a metropolitan city, now called New Jerusalem, as if to remind themselves and the world that they are never going to be safe— that they must defend their homes at all costs, even if it means becoming the very monster they claim they are fighting.

When one kills a life, two things happens:

First, the taking of a soul morphs into an addiction we call bloodlust, equivalent to the experience of someone injecting heroin into their bodies for the first time—you are filled up with the illusion of superhuman power.

Second, this same illusion begins to corrode the soul, like battery acid, so the heart hardens towards hate turned inward, alchemizing the shadow rather than integrating it.

The potential of a teenager holding a gun is the separation potential from Good and from God.

The victim has the potential of becoming the perpetrator.

Home is where the heart is.

Don’t you know that we are in this world but not of it?

The true home you defend can not be resolved through hardened walls and better guns, but through your own spiritual walk with God.

The true home is a handshake rather than a shake down.

Good people are created equally—the people enclosed by the walls are just as chosen as the ones who built the walls. This is the lesson of the Holocaust: Those imprisoned are just as good as the wardens who contain. While the nazi wardens thought they were containing evil, they did not see the evil rise within their own hearts in their own acts.

Catch yourself in the act before the act catches up to you.

Don’t you know home is a space in your heart rather than a physical place on this land?

What good is land if the people in it are not loving?

What good is Jesus if he did not sacrifice himself for the sake of humanity?

What good is Mohammad if he did not preach the word of God’s will to unite us all?

What good is Moses if he stayed as a prince isolated inside the prestige of Egyptian Royalty?

It doesn’t make any sense when seen from the lens of a visitor.

Let’s not forget, all God’s chosen ones are visitors.